Join the Facebook event page and send us pics of your run with
#WVRootsRUNdeep on social media!

The Annual FCA Night of Champions is an evening you will want to make part of your calendar each year.   There is always a featured guest speaker.  In the past those have included Tony Dungy, Lou Holtz and Woody Williams.  Also, during the evening, we honor a local volunteer with the Impact Award.  This is given in recognition of the influence that person has had on the ministry in West Virginia.

This year, we will have Darryl Strawberry, a former professional baseball right fielder and author who played 17 seasons in Major League Baseball.

Tickets and Table sponsorships are available. With a table comes 2 VIP passes to meet Darryl and get a photo before the banquet. (VIP begins at 5 p.m.)

Throughout the 1980s and early 1990s, Strawberry was one of the most feared sluggers in the sport, known for his prodigious home runs and his intimidating presence in the batter’s box with his 6-foot-6 frame and his long, looping swing that elicited comparisons to Ted Williams’. 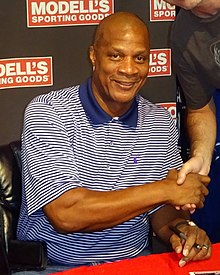 The golf outing that benefits the WV State office is held at Edgewood in the late summer/early fall each year.  Teams and hole sponsors are needed.  Tee time is 1 p.m. and lunch is provided.  Each player is $150 and each hole sign is $100.

This event was started more than 20 years ago by a group in St. Albans.  It has been, at its largest, a week-long event with more than 100 teams involved from all over the state.  Currently, it is two basketball filled days in December at WV State University and where you can watch 16 games between 32 teams.   If your high school would like to inquire about participating, please reach out to us.  There is no charge to participate.   Tickets for spectators are sold daily.

This is our annual fund drive to raise our needed budget.  This is where we ask people to consider joining our team and support us at any amount.  Gifts can be one time, monthly, or quarterly.  There are extra incentives for becoming an “Automatic Monthly Partner” and we would be happy to tell you about that if you contact us.  This campaign, while always ongoing, is focused on in the fall through the end of each year.